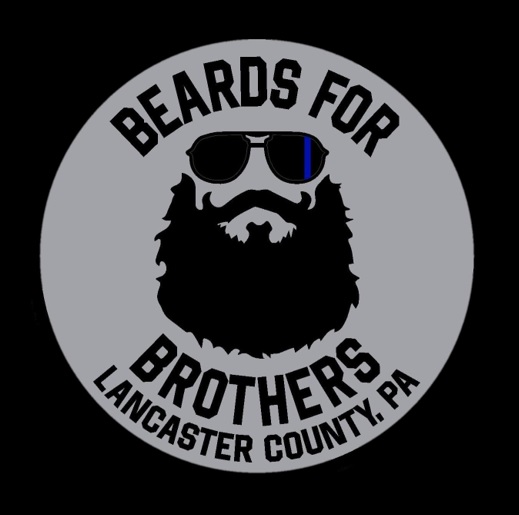 LITITZ BOROUGH - It's #noshavenovember which means it's time for #beardsforbrothers

Each year Officers select a first responder, an immediate family member of a first responder, or an organization from the community who is currently battling Cancer, or provides care to those battling cancer.  This year the Beards for Brothers campaign will raise money for two recipients.

Jen Kunkle, wife of Sgt. Chris Kunkle West Hempfield Township Police and Terry Longacre, Chaplain for the Fraternal Order of Police Red Rose Lodge #16.  Jen Kunkle, has been married to Sgt. Chris Kunkle for 22 years, and they have one beautiful 12- year old daughter.  The spouse of a first responder is our “rock” and the “glue” that holds our families and lives together.  The weight they bear can be overwhelming.  They selflessly take on the challenges associated with first responders with little to no recognition or accolade.  In August, Jen found a lump in her neck.  She had surgery to remove it but was told in October it was Lymphoma.  Jen is still waiting for a full diagnosis and treatment plan, but was told she has B-Cell Non-Hodgkin’s Lymphoma and will need chemotherapy.

Terry Longacre began his law enforcement career in Shamokin Dam, PA.  Terry later relocated to Lancaster county and joined the Manor Township Police Department where he retired after 23 years of service.  Prior to his law enforcement service, Terry proudly served in the U.S. Army as a Medic specializing in maxillofacial reconstructions during the Vietnam War. Terry has served as a Delegate for the Fraternal Order of Police, Lancaster Red Rose Lodge #16 and as a Director for the Lancaster Chapter of the Blue Knights Law Enforcement Motorcycle Club.  He currently serves as the Chaplin for the FOP Red Rose Lodge #16 where he continues to support his Brothers and Sisters in Blue.

In July of this year, Terry was diagnosed with squamous cell carcinoma in his throat and neck regions.  In September, he underwent several surgeries to remove lymph nodes and affected areas.  Unfortunately, the cancer was not fully contained so he will start chemotherapy and radiation treatments in the beginning of November.  With the full support of his wife Pam, his family and many friends, including those in the law enforcement community, Terry hopes to get back to a quality of life like he enjoyed before his diagnosis.

As first responders, we swore to serve and protect our communities.  We chose to raise money to support those community members that are fighting the battle against cancer and show them first responders stand beside them. Please consider donating to our campaign! https://www.gofundme.com/f/beards-for-brothers-2020