A 27-year-old Warminster resident remains incarcerated after he was arrested for felony criminal trespass after his unlawful entry into the gated and fenced perimeter of the secured MAA facility in Penn Township. MATTHEW MARK WITHERSPOON, of 601 Beaver Road, Warminster PA was taken into custody by NLCRPD Officers and subsequently charged with at least one felony offense.

On 10/09/2021 at 0632 hours NLCRPD was dispatched to the Manheim Auto Auction (MAA), 1190 Lancaster Rd in Penn Township for a reckless driver. The MAA security advised Lancaster County Radio that they had a male driving recklessly through the property. NLCRPD was met by MAA security team members who informed the NLCRPD they had locked down the facility and the subject was to be located in the 400-lot area of the property. At approximately 0620 hours security saw the s subject driving the gray Hyundai go through the security check point and enter MAA property. This is a posted area that is manned by security personnel. This entrance is closed to incoming traffic on the weekend. Security observed the subject drive into the 500 and 400 lots. MAA security called 911. At some point the subject had parked the Hyundai and gained access to a red Subaru RX . The subject started driving the Subaru around and eventually parked it on a ramp. The subject then gained access to a gray Nissan Altima. This is the location the subject was apprehended by the NLCRPD patrol and taken into custody for felony criminal trespass. The NLCRPD patrol developed further probable cause to arrest as he approached the driver side of the Altima and attempted to speak with the subject inside. The NLCRPD patrol observed a syringe on his lap. The subject was acting very erratic and talking to himself. He was shaking and appeared irritable, confused and paranoid. His condition led me to believe that he was under the influence of drugs. The arresting NLCRPD officer located a small amount of suspected crystal methamphetamine, syringes, and a container of medical marijuana. The Hyundai was impounded at the NLCRPD secure impound storage facility.

The subject was transported to the NLCRPD Departmental Headquarters for Live Scan / CPIN automated arrest booking and subsequently committed to the Lancaster County in lieu of bail. Additional charges are anticipated. Further details to be released as they are available. 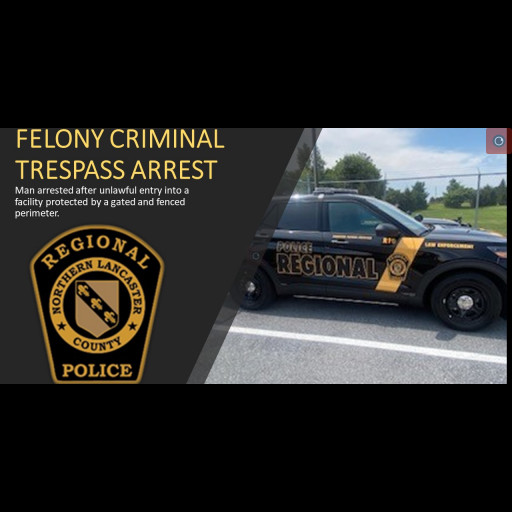