The NLCRPD was dispatched to a residence located in the 400 block of Arrowhead Drive in Warwick Township for a check on the welfare call. The welfare check was for a subject who failed to report to his place of employment, and the employer called out of concern for the subject’s welfare. Arriving NLCRPD patrols found the rear door of the residence unlocked and made several announcements prior to entering the residence. After entry the officers observed blood smears and blood trailing on various residential surfaces. The officers then checked the homes basement where they located a blood soaked and unresponsive adult male victim suffering from multiple stab wounds. NLCRPD requested EMS assistance with the transport of the victim to an undisclosed medical treatment facility for treatment of life-threatening injuries. NLCRPD Forensic Team members and Criminal Investigation Unit Detectives and secured a search warrant for further on scene processing. The Office of the Lancaster County District Attorney was consulted concerning the matter in accordance with NLCRPD policy requirements and best practice protocols.

The NLCRPD has concluded the investigation into this incident after interviews with over a dozen associated persons, collection of over 53 items of evidence, execution of numerous search warrants for a seized vehicle, electronic evidence and medical records, and toxicology reports. The scene of this incident was subject to capture by NLCRPD body worn camera (BWC) images of the initial sweep of the home, blood spatter and trailing to the basement of the home where the male was found semi-nude in a sitting position covered with blood. The victim a male age 36, was struggling to speak and found sitting in a darkened room at the bottom of a stairway. The home contained assorted drug paraphernalia including small amounts of marijuana and methamphetamine. Investigation and interviews determined that following a period of illicit drug ingestion, the victim felt he inflicted the injuries upon himself.

This posture adopted by the victim was consistent with the information known to the investigators. This included the home being secure upon arrival of the initial responding officers, the existing forensic , the outcomes of the interviews and other processes associated with the investigation. In addition, other information not subject to disclosure by statutory requirements as non-public information supports this theory of the mechanics of the injuries and forms a secondary basis for the conclusions arrived at by investigators.

The NLCRPD the investigation is now concluded with a reasonable degree of certainty with the finding extensive injuries were self-inflicted by the victim within his own course of conduct. 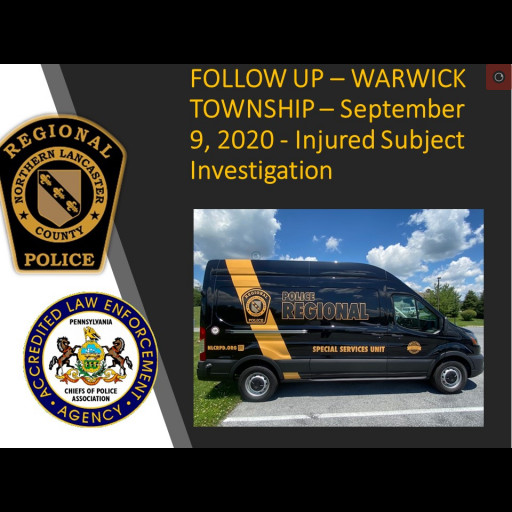