Lancaster County police chiefs, mayors and other municipal leaders demanded at a Tuesday budget meeting that the board of commissioners commit county funding to sustain the Drug Task Force for the time being and years to come.

Leaders of local municipalities voiced their support of the Drug Task Force, saying its existence is vital in saving lives and keeping communities safe.

District Attorney Craig Stedman has asked for years that the county commissioners provide a more sustainable funding model aside from the current system, which leans on voluntary contributions from municipalities and forfeitures from drug law enforcement.

The county commits about $100,000 a year to the Task Force’s current $1.3 million budget – most of which pays for investigators’ salaries.

Most DTF officers are municipal officers on loan from their home departments to serve stints with the Task Force, which targets mid and upper-level drug trafficking across the county.

Municipal leaders announced at the meeting they will be submitting resolutions to the board of commissioners asking that Task Force expenses be included as a county budget line item.

“All me and my officers want to do is go out and make the county safer [and] arrest drug dealers. I don’t want to get caught up in all this political crap,” Det. Sgt. John Burkhart, head of the Task Force said at the meeting. “You need to do something, not attack people. Do something.

“People are dying and you are letting the Drug Task Force nearly go away for a political slap fight.”

Burkhart said Lancaster County is in the midst of opioid and methamphetamine epidemics.

Stedman said numerous other district attorneys use taxpayer funds for work vehicles; his use of forfeiture funds was to spare the taxpayer.

Police and municipal leaders in attendance said the DTF funding crisis has been well-known for many years. At formation in 1992, the voluntary contribution setup was to be supplemented by other reliable funding streams.

“This was a funding model that was dysfunctional from day one,” DA Stedman said. “What kind of government can function on voluntary contributions?”

“Allegations” over forfeiture spending are “red herring[s],” Chief Wiczkowski told the board. “You didn’t start the mess, I get it… But you kicked the can to the end of the road – the road’s over. Fix it."

“Let’s get beyond this, because people’s lives are at stake," the chief said.

Lancaster County Budget Services produced studies, starting in 2013, that predicted a funding crisis would play out by 2019.

Yet, no action was taken.

At the end of Tuesday’s meeting, Commissioner Dennis Stuckey commended DA Stedman for his budget and 2020 projected expenses being down $116,000 from 2019.

Stuckey said he would not support county funding for the Task Force unless municipalities “put some skin in the game.”

As the board attempted to close the meeting, DA Stedman asked for a solution or agreement regarding funding the Task Force now and beyond.

“What does anybody else in this room have to do that’s more important than talk about the Task Force funding for this community in the midst of an opioid crisis?” Stedman said.

The board said Budget Services would assist in a review of DA’s Office budget, and, if deemed necessary, the county will “revisit” solutions. 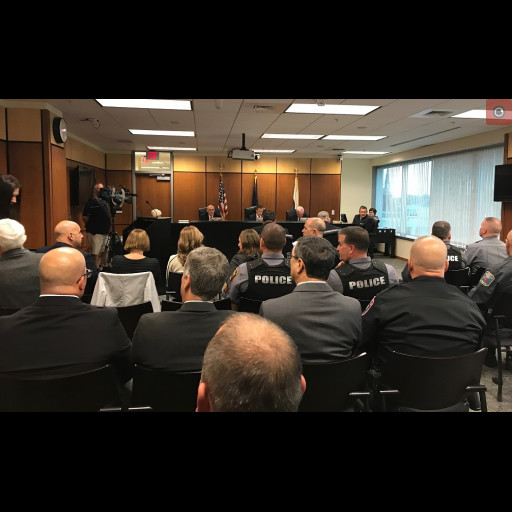