This week is National Police Week, a dedication to honoring our law enforcement community.

“On behalf of our office, I extend my gratitude to the entire law enforcement community and the vital work that they do in our community,” Lancaster County District Attorney Heather Adams said. “As we celebrate National Police Week, we pay tribute to those who serve and those who dedicated their lives to keep Lancaster County safe.”

This past Sunday, Grace Church at Willow Valley hosted the 36th Annual Police Officers’ Memorial and Appreciation Service ceremony. Our office would also like the thank Grace Church for their longtime tradition of honoring law enforcement.

The ceremony began with a welcome, the singing of the National Anthem, and a scripture reading and prayer.

Lt. Nickel began his career as a patrol officer in 1997 and served in that role for almost six years patrolling the Southeast section of Lancaster city on police bicycle; he was part of the Neighborhood Oriented Policing initiative and made an impact on the drug trade in the area. 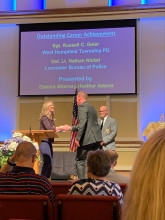 Nickel transferred to the Criminal Investigation Division in 2002 and became a Detective in 2004, a Sergeant and unit supervisor of the Violent Crime Unit in 2012, and a Lieutenant and officer in charge of the VCU in 2020, during which he investigated various homicides including arson, stabbings and shootings.

Nickel has been further recognized for his accomplishments with the Lancaster City Bureau of Police Henry Kauffman Award for outstanding investigative efforts, the 2010 Lancaster County Chiefs of Police Outstanding Investigator of the Year Award, numerous awards for his valor during an armed confrontation in 2003, and recognition from the Pennsylvania State Police, Bureau of Alcohol, Tobacco, Firearms and Explosives, and the New York City Police Department for assistance he provided their agencies during investigations. Nickel also served as a long-time volunteer counselor at Camp Cadet. 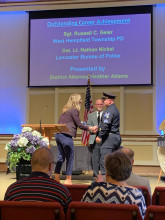 Geier was promoted to Corporal in 1991 and Sergeant in 2006, working as an Administrative Sergeant focused on obtaining grants, equipment, and technology for the department. He served many years as a Patrol Sergeant.

Geier received commendation letters for peacefully handling an incident involving a suicidal subject in 2006, rescuing a woman and child from a dangerous domestic situation in 2010, and assisting another agency with a civil unrest situation in 2020. He also was recognized by the PA Aggressive Driving Enforcement & Education Program in 2010 and 2015 and dedicated time to community service events such as the Jail Bail Fundraiser and the Shop with a Cop Program. 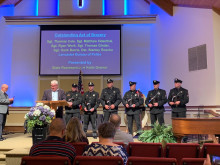 This group of six Officers were part of the Lancaster County Special Emergency Response Team (SERT) that successfully rescued a hostage in Manheim Township in December 2020. Officers entered a home on Knollwood Drive after hearing a female hostage screaming from inside. The team quickly identified two rooms in which the hostage and hostage-taker would be in. Once inside the room, officers addressed the armed hostage-taker while putting their own bodies in between the hostage and hostage-taker, without regard for their own personal safety. The team was able to rescue the hostage despite the high potential for serious violence and injury to themselves.

The winner of the Outstanding Officer of the Year Award, presented by Senator Aument, was Lititz Borough Police Department Officer Tyler S. Weinoldt. 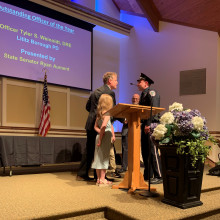 Officer Weinoldt performed 62 drug influence evaluations as a Drug Recognition Expert (DRE) in 2020, which was the most of any municipal DRE in the entire commonwealth of Pennsylvania. DREs are police officers who receive extensive training to recognize impairment in drivers who are under the influence of drug(s) other than, or addition to, alcohol.  Drug DUIs accounted for approximately 30% of the entire DUI caseload in the Lancaster County Court of Common Pleas for the last several years.

The ceremony concluded with a closing prayer for officers and their families. 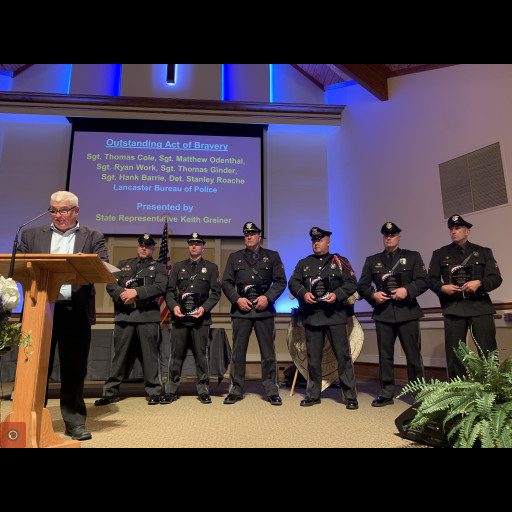