On Friday March 20, 2020 at approximately 2056 hrs. Officers from Lancaster Bureau of Police, Platoon B, responded to the Rite Aid 825 E. Chestnut St. for a report of a robbery that had just occurred.  Upon arrival Officers met with store employees and customers. Officers were told that (4) unknown male suspects entered the store from the main entrance. Customers that had been outside the store at the time of the suspect's arrival were forced back inside the store at gunpoint.  The (4) suspects all wore dark clothing, hooded sweatshirts, gloves and face masks. All (4) suspects were armed with handguns.  The employees and customers at the front of the store were held by a suspect while the others ran back to the pharmacy area. The suspects vaulted the counter and forced the pharmacy employee to provide them with narcotics that were in a secured location. The employee complied and the suspects took the narcotics.  When the robbery was completed all (4) suspects left the store by the main entrance. The victim's believed that the suspects got into an unknown vehicle, a light colored sedan, possibly a Saturn,  that had been parked on the 800 blk. E. Chestnut St. The direction of travel from that point is unknown. No injuries were reported as a result of the robbery.  Officers and Detectives continued the investigation by speaking with the victims, obtaining internal surveillance video, canvassing the area around the store for external surveillance locations and potential unknown witnesses.

As a result of this incident, Rite Aid has offered a reward of up to $10,000 for the arrest and conviction of any person or persons responsible for the robbery that occurred at the 825 E. Chestnut St. store on 3.20.2020. 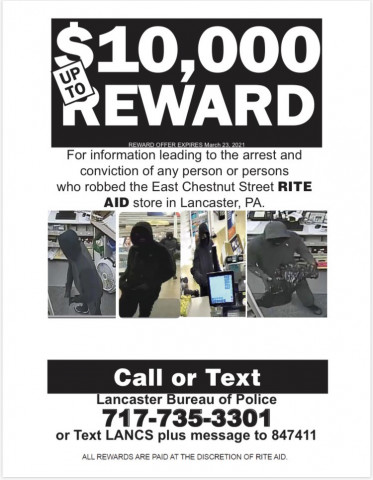 Any reward offered or paid by Rite Aid is done so at the sole discretion of that company and is independent of and not affiliated with any reward offered by Lancaster Crime Stoppers. Anyone with information that may lead to the identification and arrest of these suspects may still use the Crime Stoppers phone line or text tip submission.

Anyone with information on this incident or the identities of the suspects is asked to contact Lancaster Bureau of Police at 717-735-3301 or Lancaster Crime Stoppers at (800) 322-1913, or you can anonymously Text a Tip to Crime Stoppers by using your cell phone. Text LANCS plus your message to 847411. Callers may remain anonymous and do not have to give their names. 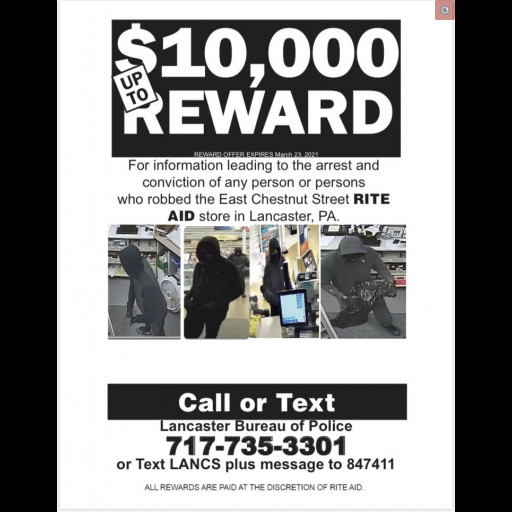