During the October 1, 2019 West Hempfield Township Board of Supervisor’s Meeting, the board recognized Corporal Douglas L. Ober for his exemplary performance and officially promoted him to the rank of Sergeant.

Sgt. Ober has been with the West Hempfield Township Police since February of 2002.  Prior to joining our department, he was a police officer at Manheim Borough Police for 5 years.

In 2009, he was promoted to the rank of Corporal.  As a supervisor, Doug has demonstrated excellent leadership skills and commitment to the highest standards in law enforcement. He was recognized as Officer of the Year in 2015 and has received numerous other commendations throughout his career, not only from our department, but from other departments in the County.

Doug goes above and beyond to serve his fellow officers and community. Outside of our department, Doug serves as the Vice-President of the Red Rose Lodge #16 – Fraternal Order of Police and has been a volunteer firefighter for over 30 years at the Manheim Fire Company.

Doug’s family and friends were present when Chief Lisa Layden presented him with his Sergeant badge and his wife, Chelsie officially pinned the badge on his uniform. 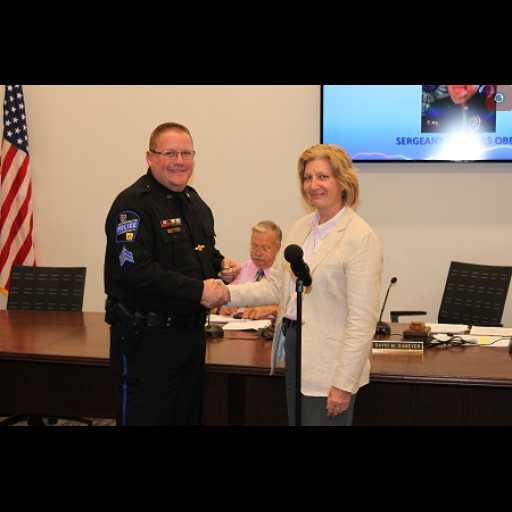