Each year the West Hempfield Township Board of Supervisors recognizes officers and citizens for actions during the previous year that are above and beyond expectations, and in some instances saved or prolonged the life of another.

For the year 2020, we wish to formally recognize the following officers and citizens for commendable acts that exceeded normal duties and responses.

Officer of the Year:

For his service to Lancaster County as the DUI Coordinator for over ten years. The Center for Traffic Safety described Jim as “instrumental” in making numerous DUI and unsafe driving campaigns a success across the County. We cannot measure the number of lives that were likely saved by these efforts over the years.

In addition, Jim pioneered the implementation of the Second Chance Program for the Department. This program is an asset to the Dept and community as it provides an option other than arrest for people who have committed non-violent offenses, and are struggling with addiction.

Jim was also appointed OIC for his shift early in 2020, and was nominated by his Sergeant as not only an excellent OIC, but a true asset to all patrol efforts.

Officer Bart L. Hollis – Responded quickly during a snow storm for a man who was unresponsive and not breathing. He was on scene without assistance from other officers or EMS. He provided CPR, utilized an AED, and delivered Narcan to the individual. The patient began breathing and EMS personnel were able to take over when they arrived and transport the man to a hospital where he was expected to fully recover.

Officer Jim Gardill – Responded to a home in the Township for a patient in cardiac arrest. He provided immediate CPR, and then AED service that resuscitated the women. EMS also recognized Officer Gardill for this life-saving treatment, as he was the only emergency responder on scene and provided the care (AED shock) that undoubtedly saved her life.

Officer Richard C. Bowermaster Jr. – For organizing the Beards for Brothers Campaign, that raised over $17,000 for Emergency Responders or their family members who are battling cancer.

Officer Bart L. Hollis – For organizing the Toys for Tots Program, Good to Give Initiative and National Night Out collaboration (2019), that collected toys and basic necessities for local families and served our community.

Officer Karl J. Hartranft – For conducting excellent criminal investigations, one involving the kidnapping of a young girl from another state. The child was brought to safety and the suspect apprehended quickly and safely. And for a separate investigation where a stolen vehicle was recovered and the suspect also quickly apprehended due to the tenacity and dedication of Officer Hartranft. His investigative skills are an asset to the Department and the community.

Officer John J. Schwab – For being a dependable Officer, here for every scheduled shift throughout the year.

Awarded to a Township resident who provided assistance to our officers during a crisis situation involving one of his neighbors. This was a situation that involved firearms and could have easily resulted in serious harm to our officers and citizens. All was resolved peacefully due to this citizen’s direct actions. 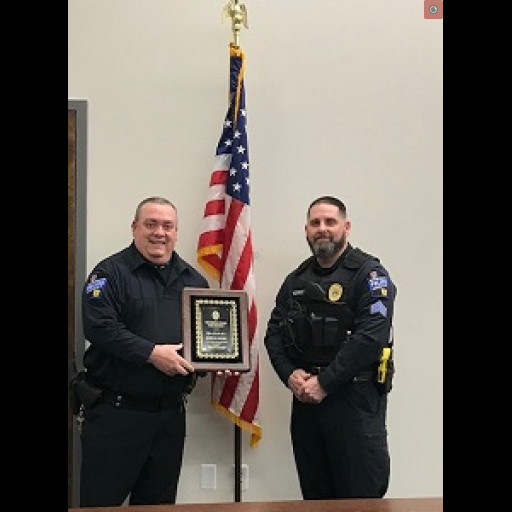