NLCRPD is releasing the identity of the deceased male found in a vehicle on Sunday morning in Penn Township Lancaster County. LYLE SCOTT DOYLE, age 49, of a last known address in the 100 block of Cedar Street, Lititz, PA. Initial investigation proved difficult to verify a fixed address for the victim, due in part to the use of multiple name variations, and lack of identification by the female associate of the deceased. The relatives of the deceased were ultimately located in Arizona and have been notified of the death.

The according to statements at the scene in the hours prior to the death, illicit drugs were ingested by the female companion who further claimed DOYLE ingested illicit drugs at one or more house parties in the Borough of Manheim. According to statements obtained by NLCRPD, DOYLE and his companion were picked up at by a friend who frequently drives the couple from place to place, at a residence in the Borough of Manheim at approximately 23:00 hours and driven to the 100 block of Penn Valley Village Road, Penn Township.

NLCRPD is awaiting determinations by the Office of the Lancaster County Coroner related to toxicology reporting. The circumstances surrounding the death are not considered suspicious or criminal in nature and are the likely result of pre-existing medical conditions and other impacting factors. All actions related to the on-scene phase of the investigation of this incident and associated statements of involved parties have been captured by utilization of NLCRPD BWC technology and are included within the NLCRPD investigative case file to assure accuracy in the depiction and preservation of events .

The NLCRPD requests anyone with further information on the persons responsible for the furnishing of illicit drugs to the deceased or who may have further information in connection with this investigation, is requested to contact the NLCRPD at 717-733-0965 or to submit a tip via the Crimewatch tip submission section of the website. 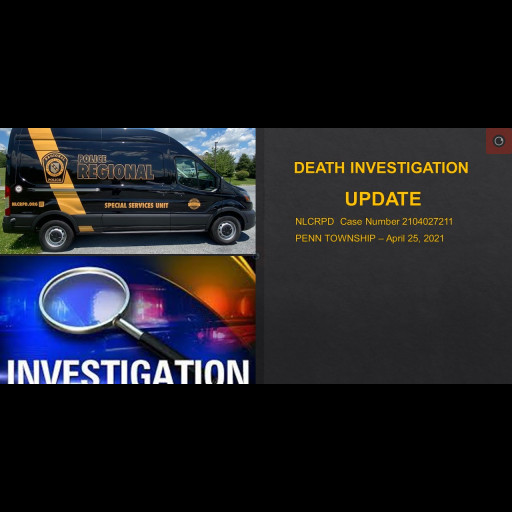