NLCRPD investigated a crash involving an emergency services vehicle and a vehicle that was following the ambulance too closely. On September 14, 2021, at 00:35 hours the crash was investigated at the UPMC Lititz Medical facility. The crash occurred as an ambulance owned by Manheim Township Ambulance (EMS), operated by an employee of the EMS group, was impacted in the rear of the vehicle by a 2015 Dodge Charger, driven by a subject identified as MICHAEL B. KEY, age 31, of Middlegreen Court, Lancaster, PA .

The vehicle driven by KEY was following the ambulance which was transporting a KEY family member to the UPMC Lititz medical facility. As the ambulance was turning onto Millport Road from Route 501 northbound, the KEY vehicle struck the rear of the ambulance causing impact damages. Both vehicles continued to the nearby medical facility where the patient was attended to and reporting of the crash followed.

The NLCRPD patrol officer investigating this crash determined that KEY was operating a vehicle during a period of license suspension. NLCRPD issued KEY a citation for the suspension related offense and a second citation for the summary offense of following too closely. No persons were reported injured in this crash and both vehicles were able to be driven from the scene of reporting. 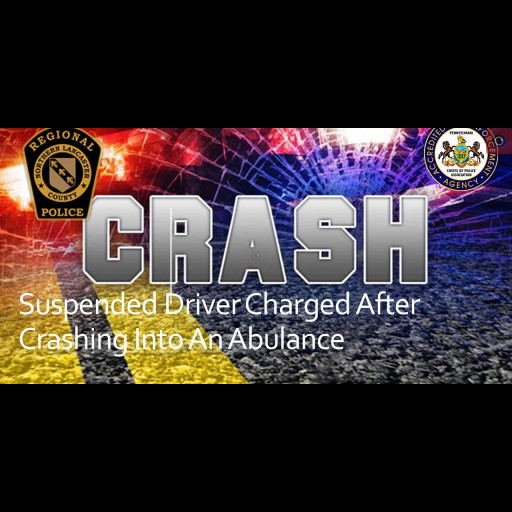