Feral Cats Cannot be Cared For and Here's Why!

The Manheim Township Police Department has seen a recent increase in complaints and questions from residents regarding domesticated cats being outdoors, also known as feral cats.  We have drafted this news piece to help answer some of those questions.

In 2000, Manheim Township enacted an ordinance which addressed cats and other animals running at large or causing a nuisance.  An animal is defined as all mammals, birds, fowl and reptiles normally or ordinarily domesticated (including household pets such as dogs and cats) or raised in this area or climate as livestock or for work or for breeding purposes.  It is illegal for any person to harbor, care for, shelter or maintain any animal in such a manner as to disturb or unduly annoy the public through the animal's noise, barking, smell, mischief or other harmful propensities.  This includes feeding / caring for feral cats and / or feral cat colonies.  Similarly, it is illegal for the owner of any animal to allow the animal to go beyond the boundaries of their premises or to run at large over the streets or public grounds or upon the property of another.  Additional information about the local law can be found BY CLICKING HERE.

There are many potential dangers faced by outdoor cats, some of which can be mitigated.  Outdoor cats can be exposed to a litany of diseases to include rabies, feline leukemia, and the feline immunodeficiency virus.  Similarly, by being outdoors, cats can also be exposed to fleas, ticks, and mosquitoes, all of which can transmit diseases such as feline infectious anemia and heartworms.  Another preventable problem associated with outdoor cats is unwanted pregnancies.

To avoid these concerns, pet owners should ensure their cat/s are up to date on all vaccinations, as well as maintaining a proper flea/tick and heartworm preventative regimen.  Also, due to the persistent and staggering overpopulation issue, it is imperative to have your cat/s spayed or neutered before they are permitted outside.  Also having a collar with proper identification information upon it can aid others in returning a lost cat.

Unfortunately, unsupervised outdoor cats are also at risk for several serious problems that cannot be easily avoided.  These include incidents with motor vehicles, encounters with other animals, and exposure to toxins, both man-made and natural.  All of these factors need to be heavily considered before permitting a cat to have access to the outdoor world.

The presence of feral domestic cats can create negative consequences for humans and wildlife.  Communities can become healthier and safer when feral cats are removed in lieu of maintaining them in feral cat colonies.

Public health scientists, public health agencies, and professional organizations such as the National Association of State Public Health Veterinarians recognize that maintaining cat/s outdoors is bad for human health.  Domestic cats are consistently the #1 carrier of rabies among domestic animals and are disproportionately more likely to expose people to rabies than wildlife.  Thanks to modern medicine, once exposed, most people do not acquire rabies.  However, the exposure is dangerous and costly.  Similarly, cats are the only definitive hosts for the parasite Toxoplasma gondii, which causes toxoplasmosis.  Up to 74% of all cats will host this parasite during their lifetime and excrete hundreds of millions of infectious eggs into the environment through their feces. When a person accidentally ingests this parasite, they may experience blindness, miscarriage, a child born with developmental problems, memory loss, or death.

Cats have contributed to the extinction of numerous species and are a non-native, invasive species in North America that can cause severe ecological disruption and degradation.  Cats often kill birds and other mammals or spread disease to other wildlife which greatly impacts the environment.  In addition to destroying wildlife, they can disturb flowerbeds and landscaping as well.

It should be noted that trap, neuter, release programs are considered bad policy.  Over time, TNR programs have consistently failed to reduce feral cat populations.  These programs facilitate the spread of diseases and maintain cats in unsafe conditions.  Feeding feral cats, often associated with TNR programs, does not reduce predation on wildlife. 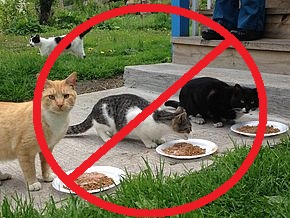 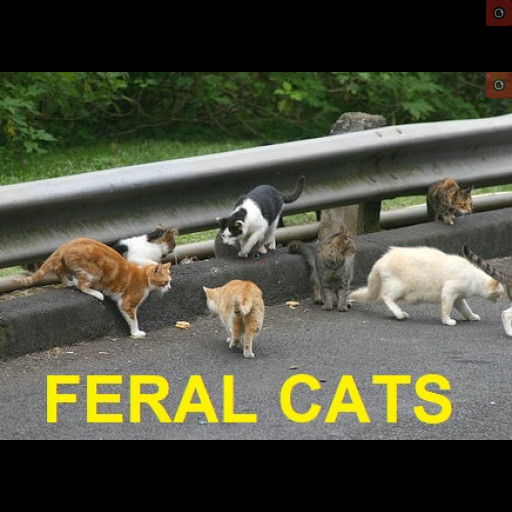