On Sunday January 12, 2020 at approximately 0149 hrs. Officers from Lancaster Bureau of Police, Platoon B, responded to the 400 blk. New Holland Ave. for a report of (2) pedestrians that had been struck. The striking vehicle and driver fled the scene, last seen southbound toward E. Walnut St.

The victims, an adult female (31)  and adult male (31), were both taken to the hospital with serious injuries. As of the time of this release, both are still at the hospital receiving treatment for their injuries. The initial information obtained indicated that the pair had exited Quip's Pub and crossed New Holland Ave. toward the Cork Hotel. Both victims are residents of Philadelphia.

Officers at the scene located parts of the suspect vehicle. Lt. Radmore was able to ascertain that the parts were from a 2007 - 2009 Toyota Camry, red in color. Officers from Lancaster City and surrounding jurisdictions were provided that information in an attempt to locate the vehicle and driver.

Shortly after 0500 hrs. Officers from Platoon B received information that the suspect driver from the crash had turned himself in to Police in Mount Joy Borough. Det. Gunnet responded to the Mount Joy Borough Police Department to speak to the suspect, a (26) year old male resident of the 700 blk. Wood St. in Mount Joy.

Off. Ben Bradley responded to the suspect residence and secured the suspect vehicle. The vehicle was later towed to a secure location for a Search Warrant.

When the investigation is complete, the lead investigating Officer, Detective Shawn Gunnet, will consult with the Lancaster County District Attorney's Office to approve any charges that will be filed. The suspect identity will be published when any charges related to the crash investigation have been filed.

Anyone with information on this investigation is asked to contact Det. Shawn Gunnet gunnets@lancasterpolice.com or Lancaster Crime Stoppers at (800) 322-1913, or you can anonymously Text a Tip to Crime Stoppers by using your cell phone. Text LANCS plus your message to 847411. Callers may remain anonymous and do not have to give their names. 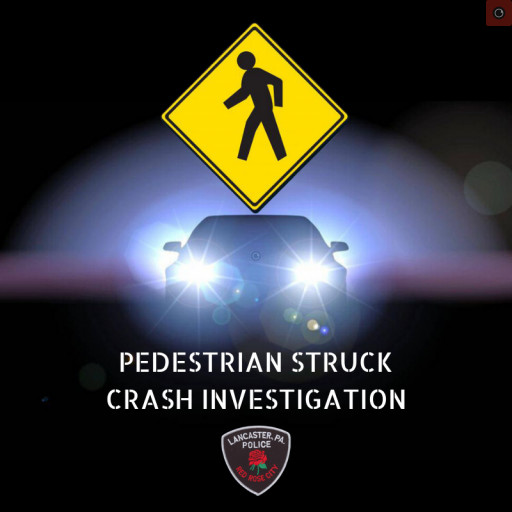