On Tuesday June 11, 2019 at approximately 0234 hrs. Officers from Lancaster Bureau of Police, Platoon A, responded to an address on 600 blk. Euclid Ave. for a report of a stolen vehicle. The owner had been inside a residence visiting a friend. The owner had left the vehicle in a driveway. The key had been left inside the vehicle. The owner discovered the theft just prior to contacting Police. The vehicle information, a 2019 Honda Civic white sedan, was entered into a national database (NCIC) as stolen.

On Wednesday June 12, 2019 at approximately 0147 hrs. a friend of the owner spotted the stolen Honda in the area S. Queen St. and Hazel St. in Lancaster City. Police were notified and checked the area but did not locate the vehicle.

The same caller saw the stolen vehicle at approximately 0222 hrs. in the area of Rosewood Terrace Apartments in East Lampeter Twp. Officers from that jurisdiction responded to the area in an attempt to locate the vehicle. ELTPD Officers located the vehicle on Old Philadelphia Pike. When they attempted to stop the vehicle the driver refused to stop and a vehicle pursuit was initiated.

The pursuit went through parts of East Lampeter Twp. and in to Lancaster Twp. as the driver headed west on Lincoln Highway East (Rt. 462). As the driver passed the intersection of E. King St. and Ranck Ave. an Officer from Lancaster City deployed stop sticks in an effort to safely deflate the vehicle tires and stop the pursuit. The vehicle was stopped by East Lampeter Twp. near the intersection of E. King St. and N. Broad St.  (5) juvenile occupants of the vehicle were taken into custody and transported to the Lancaster Bureau of Police station. Lt. Kurt Miller responded to assist with the investigation as part of the Lancaster Auto Crimes Unit.

All persons accused of a crime are presumed innocent unless proven guilty or adjudicated delinquent in court.

The Lancaster Bureau of Police would like to take this opportunity to remind residents of a few crime prevention tips.

Do not leave valuable items like purses, wallets, phones, laptops, jewelry, firearms and cash in a vehicle. Thieves are always on the lookout for easy targets and unattended vehicles containing valuable items are just that.

We would also remind residents to lock your cars doors and never leave a key to the vehicle in or around the vehicle. Most cars manufactured today have standard anti-theft features that make it difficult to steal a vehicle without the key. Most car thieves are looking for targets that are easy to steal and providing them access to the key makes it all too easy to steal. 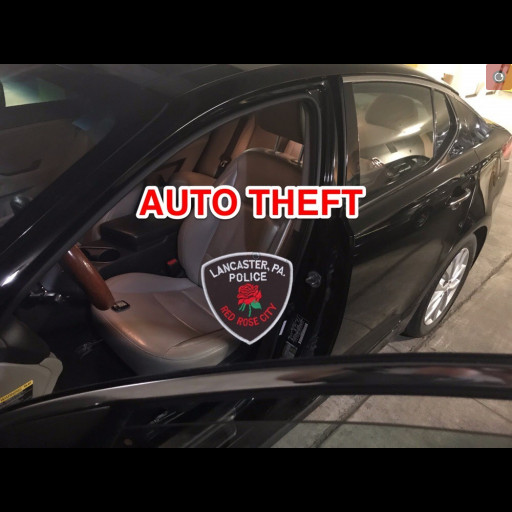