Lieutenant Brubaker was hired by East Hempfield Township. in August 2000.  She began and continues her career in the patrol division.  While a patrol officer, she served as a Field Training Officer, Bike Officer , was a member of the Lancaster County Auto Theft Task Force, the Lancaster County DUI Task Force, Crisis Intervention Team and was a hostage negotiator for the Special Emergency Response Team.  Lieutenant Brubaker was promoted to Sergeant in January 2013 where she supervised a platoon and the departments K-9 unit.  In August 2014, she was promoted to Patrol Lieutenant.

Lieutenant Brubaker graduated from Cumberland Valley High School and Elizabethtown College.  She holds a B.S. in Business Administration.  Lieutenant Brubaker has attended a number of police leadership and supervisory classes.  While serving as a Patrol Sergeant, her shift received numerous unit citations.  She is married with two dogs.  When not working, Lieutenant Brubaker can be found enjoying outdoor activities such as biking, running, hiking, skiing and kayaking.  Lieutenant Brubaker stands behind the department’s mission statement and motto, P.R.I.D.E. in Service. 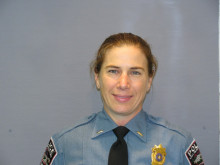