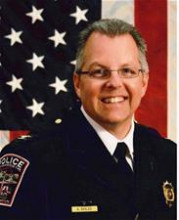 Chief Skiles was hired by East Hempfield Township in November 2010. He began his law enforcement career in 1986 as a police officer with the Lancaster City Bureau of Police.  While a patrol officer, he served as a Field Training Officer and member of the Special Emergency Response Team.  In 1990, he was transferred to the Criminal Investigation Division where he remained until November 1997.  During those years he investigated cases ranging from minor thefts to homicides. He received advanced training and experience in child abuse and child death investigation.   He was promoted to Sergeant in 1997 and then to Lieutenant in 2001.  He served as a Patrol Division supervisor and a SERT and Bicycle Rapid Response Team supervisor. He also performed pre-employment and background investigations of new employees.  In November 2001, he was assigned as the Community Policing Coordinator. In that role, he assisted the Chief of Police in reorganizing the agency so that it was structured consistent with the community policing and problem solving philosophy adopted by the City.

In 2005, he transferred back to the Criminal Investigation Division where he supervised the Property Crimes Unit and then the Special Investigations Unit.  In that capacity, he prosecuted and coordinated a wide array of complex and serious criminal investigations. He then transferred to the Administrative Services Division and served briefly before being promoted to Captain in April 2009. As Captain he served as the commander of the Administrative Services Division.  Until his retirement in November 2010, he was responsible for the oversight of the Records Unit, Information Technology, Training, Jail section, Professional Standards and Community Relations.   Additionally, he oversaw the bureau’s $20 million budget, facilities management, policy writing, and grant administration.

Chief Skiles graduated from Hempfield High School and York College of Pennsylvania.  He is a 2003 graduate of the Federal Bureau of Investigation National Academy as well as an assortment of police leadership and management programs.  During his policing career, he received numerous awards and commendations including the Richard Slaugh Patrolman of the Year and several merit and unit awards.  He is married and the father of three children. He has been a resident of East Hempfield for nearly 50 years; and he is active in various community events. He is a member of the International Association of Chiefs of Police, Pennsylvania Chiefs of Police Association , Lancaster County Chiefs of Police Association, FBI National Academy Associates, and the Fraternal Order of Police.

Chief Skiles subscribes to Sir Robert Peel’s belief that the police are only members of the public who are paid to give full-time attention to duties which are incumbent on every citizen in the interests of community welfare and existence. Any successes that the police earn must be shared with the residents, merchants, and visitors of East Hempfield Township. The Township’s trained and motivated police officers welcome the support and involvement of the community.