DA Review: Officer Justified in Fatal Shooting of Man who Had Gun to Woman’s Head

The Lancaster County District Attorney’s Office has completed its review of a police-involved shooting that resulted in the death of a 28-year-old Lancaster city man.

A Lancaster city police officer on Sept. 16 fired a shot that struck Ricardo Avenia, as Avenia was inside a home in the 500 block of Pershing Avenue. Avenia had been observed holding a gun to a female’s head inside the home. This was reported to the police and confirmed upon arrival. Police could clearly see Avenia holding a gun to the head of the victim and, as a result, an officer fired from the front porch of the residence, striking Avenia.

Avenia was pronounced dead at the home.

The police responded to the home after the woman’s children had reported to a neighbor, who called 9-1-1, that Avenia was beating up their mother and going to kill her. That information was relayed to police.

Lancaster County Detectives investigated the incident and provided all reports, evidence and all other information to District Attorney Craig Stedman who determined the use of lethal force was justified.

Had the officer not acted immediately, police believed – and District Attorney Stedman found it reasonable to conclude – that Avenia would have shot the woman.

District Attorney Stedman found the shooting was not only justified, but that the police had no other viable choice aside from the action taken. District Attorney Stedman noted that had the police failed to act, it would have almost certainly led to the loss of the life of the victim, as well as risked the lives of the children, the police, and anyone nearby who could have been hit had an exchange of fire ensued.

District Attorney Stedman notes the following key factors which led to his determination:

- Avenia was holding a gun, determined to be loaded, to the woman’s head as the officer fired.

- The woman’s children told a neighbor that “daddy was going to kill mommy”; that information was relayed to a 9-1-1 dispatcher, who relayed the information to police responding to the scene. The above indicated the woman was in immediate risk of death.

- Physical evidence, to include the woman’s hair on Avenia’s pistol, indicated she was physically abused, beaten, and her pants ripped off prior to police arrival. This evidence was further substantiated by what the officers on scene had observed: Avenia had the gun to the female’s head.

- County Detectives interviewed numerous people and statements from several individuals close to the woman indicated Avenia had been abusive and threatening to the woman for some time, that they had an acrimonious relationship, and that he presented a real, substantial threat.

District Attorney Stedman, along with lead investigators from the County Detectives Division, met with Avenia’s family to explain the determination – presenting them with all relevant video/audio evidence – prior to this public announcement.

We are not identifying the officer who fired the shot because our review showed there could be potential threats to his safety. He is a 3- to-5-year veteran of the force, and a review of his personnel file revealed no existing complaints or disciplinary action regarding use of force.

The following is a narrative of the incident:

- At 9:59 p.m., an anonymous female called 9-1-1, reporting two small children were hanging out a second-floor window of the home, yelling that their father is going to kill their mother. The caller was a neighbor. The child told the caller, the male (Avenia) was “beating up her mom real bad and he’s going to kill her.”

- At 10:03 p.m., the first officers arrived at the scene. One of the first-arriving officers relayed over radio that the subject (Avenia) was believed to be armed. The officers confirmed this, after they looked into the home, through a first-floor window and saw a male (Avenia) holding the gun to the female's head. That officer relayed all of this information, via his radio, to others on scene, as well as additional officers who were responding and arriving.

- At 10:07 p.m., an officer fired a single shot from his patrol rifle through the first-floor front window, into the kitchen, striking Avenia in the head.

- 19 seconds later, an officer radioed that one person is down and in need of EMS. EMS were dispatched to the scene, and responded immediately.

A Lancaster city police sergeant and two other officers were at the scene, close by, when the shooting happened.

No shots were fired at police.

The District Attorney’s Office took over the investigation immediately, interviewing witnesses, collecting information and evidence, all of which ultimately factored into District Attorney Stedman’s determination.

The police officers who were directly involved and in immediate proximity of the shooting officer were interviewed by Investigators, as were a number of other witnesses.

The gun, determined to be loaded when handled by Avenia, was recovered at the scene.

Avenia and the woman lived at the home with the two young children (who were seen and heard yelling from the window).

In conclusion, District Attorney Stedman notes this case is a reminder of the ongoing serious threat and pervasive issue of domestic violence in our communities.

District Attorney Stedman strongly encourages victims, especially those with children, to seek help and protection; friends, neighbors, and family members of those being abused cannot ignore the warning signs and indicators of domestic violence. Victims, for a variety of reasons, are often tentative to seek help on their own. If the signs are there, take action. It absolutely could be life-saving action.

(Attached is photo of the gun recovered at the scene.) 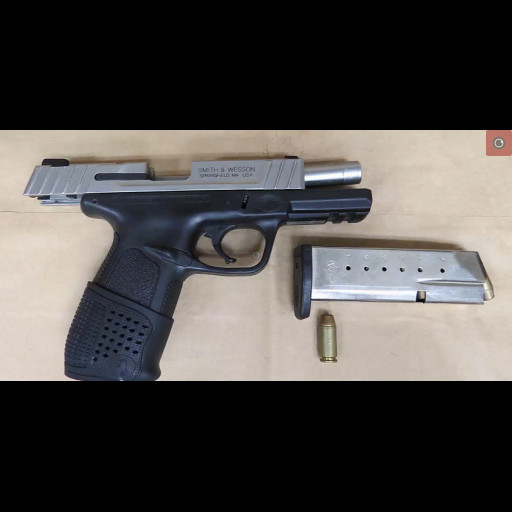